Summer blockbusters are in full effect with Cowboys & Aliens and Captain America both due out this month. Kicking off June, here is my review of Transformers: Dark of the Moon. 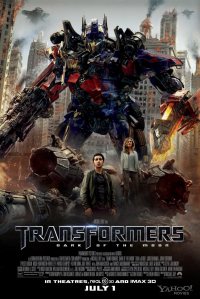 The movie begins on Cybertron and Optimus Prime summarizing the Great War. This time, we are introduced to Sentinel Prime (voiced by the original Star Trek Vulcan Leonard Nimoy), Optimus’ predecessor, escaping Cybertron and crashing on the moon in the 1950s, which led to the space race of the 1960s. Neil Armstrong and the gang actually went to the moon to check out the crash landing…
Fast forward to present day…The world is now very much aware of Transformers living on earth. They are partnering with Special Forces in the United States performing various covert ops around the world. Sam Witwicky (Shia LaBeouf), however, has been grounded. He received a medal from President Obama for saving the world, twice, but is unable to find a job. Mikaela, Sam’s girlfriend from Transformers 1 & 2 has dumped him and he is now dating Carly (played by Victoria Secret Model turned new actress Rosie Huntington-Whiteley). Carly works for Dylan (played by Patrick Dempsey), who we discover is really working with the Decepticons to take over the earth. While Sam is looking for work, the Autobots discover the space race cover up, rush to moon and retrieve Sentinel Prime. Optimus is humbled by reuniting with his mentor again. However, the Decepticons continue killing off high ranking army officials and computer programmers around the world. Eventually one in Sam’s office his killed and he is reunited with the Autobots. Sam discovers what the army officials haven’t been able to: the whole thing is a set up. The Decepticons needed Optimus to wake up Sentinel on the moon because only he can power a gateway that would literally bring Cybertron to earth. The Autobots get Sentinel to safety (by the way, there is still no action up to this point and we are an hour into the movie)…and then the plot thickens.
Sentinel thanks them for their efforts and informs them he knows why the Decepticons were after him. The only way he was able to escape Cybertron was to strike a deal with Megatron. Senteniel then kills Iron Hide and destroys the army base (DIDN’T SEE THAT COMING). He joins the Decepticons and has the US Government end its partnership with the Autobots who are then seemingly destroyed as they attempt to leave earth. The bad bots take over Chicago and Sam goes in to save his girlfriend, only to be rescued by the Autobots, who were proving to the US they need them and that Decepticons were here to stay.
The movie concludes with great music, amazing special effects, Autobots cleaning house and Optimus Prime having two epic final battles with Megatron and Sentinel Prime…with Optimus standing triumphant.
Shout outs to all the returning characters: Sam’s parents, Josh Dummel, Tyrese Gibson and John Turturro.
And if you’re a Star Trek fan, there are at least three Star Trek references in the film.

– It is much better than the second enstallment. The racist robots are gone. The movie isn’t drowning in sexual innuendo like its predecessor (although Rosie doesn’t have a scratch on her and make-up is perfect in the entire film).

– Actual plot. There were a couple of times I was surprised by the plot twists in the film.

– Cast. They all did really well. I was a little worried about Rosie coming in solely for the purpose of eye candy and never acting but she did a great job…including when she spoke.

– It took forever for the plot to unfold. We really were an hour in before anything got blown up. I felt like I was watching the Titanic for a minute (We know the ship is going to sink! Bring on the water!). It’s a movie about Transformers. They should have be fighting already!

– The Ending. It felt like a Tyler Perry ending. “We are out of money. Optimus, say something really cool and the end of the battle…Roll Credits!”