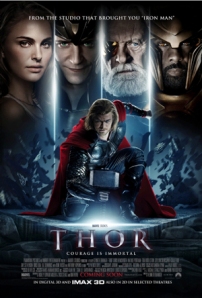 Well, it’s that time again. It is the summer of blockbusters, particularly those of us who are comic book fans. This summer kicks off with Thor, the latest installment from the Marvel Cinema Universe, and next to last movie (Captain America is next) before The Avengers.

Thor opens with Asgard, the mythical home of the Norse gods, waging war against the Frost Giants. The Asgardians are led by Odin, the chief of the gods, played by Anthony Hopkins. The good guys win and there is peace in the land. Fast forward, and Odin now has two sons, Thor and the soon-to-be villain Loki. Thor is in the process of becoming the future king, whose unparalleled strength is matched with his stubborn arrogance. He disobeys orders and attempts to fight the Frost Giants after a minor attack and is punished when Odin strips him of his powers and sends him to earth, along with a Mjolnir, Thor’s mighty hammer.

There, he meets Jane Foster, played by the beautiful Natalie Portman. While Thor is trying to come to grips with who he is minus the powers, Loki is discovering he is “the villain of the story” to steal a quote from Smallville’s Michael Rosenbaum (who plays Lex Luthor…and yes, it’s a DC quote in a Marvel movie review…get over it J). Loki lies, goes back and forth from good to evil and eventually Thor’s allies go to rescue him.

Long plot short….Thor gets drunk, feels bad, makes breakfast and has a change of heart in time to lay down his life from his friends which gets his powers restored to him just in time to have a couple of good fights and save the day. Of course, stay past the credits for the hardest working man in show business because Samuel L. Jackson does have a cameo as Nick Fury.

Chris Hemsworth/Thor: Chris is amazing as Thor. He plays him with brute strength, arrogance, charm and the king’s old English to match. There are a couple of scenes in the movie with fights and you wonder how it is going to be resolved, but Chris plays Thor so powerfully, you want this to be a real hero and to be protecting people from harm. His lines “How dare you strike the son of Odin” and “I need a horse” are classic!

Tom Hiddleston/Loki: I had never heard of this guy. I forgot I was watching an actor for a moment. He really pulls you in to the confused heart of Loki throughout the film.

Anthony Hopkins/Odin: It’s Anthony Hopkins. Come on. He is great in everything. His stage presence immediately gives you honor and respect for Odin. I was concerned when initial casting was being released to the press but felt a lot better when I heard Hopkins had signed on.

Idris Elba: Phenomenal job as Heimdall. Loved his omniscience and stone face. Shame on all the comic fans for being offended because a Black person was cast in the role. We have to diversify some of the roles if you want to honor the movie goers and not just make a buck.

The ending.  The movie just ended. I felt like I was watching a Tyler Perry movie. It literally just stopped.

Plot build up. Thor spent much time in Asgard. He spent much time trying to get back to Asgard on Earth. He spent 10 minutes realizing he wasn’t going back. I felt what they were trying to do, but he went from being exiled, accepting it, dying, and being resurrected in 15 minutes. I think they needed more time to let this simmer. Same with Loki. Everything happened so fast, I couldn’t tell if he was good, bad, lying–which is what Loki does, or just confused.

Thor was overall a good movie. It’s no Dark Knight or Iron Man, but definitely better than Iron Man 2 and The Incredible Hulk. It is a good pass to Captain America and if all goes well, we can salivate together when The Avengers comes out next summer.